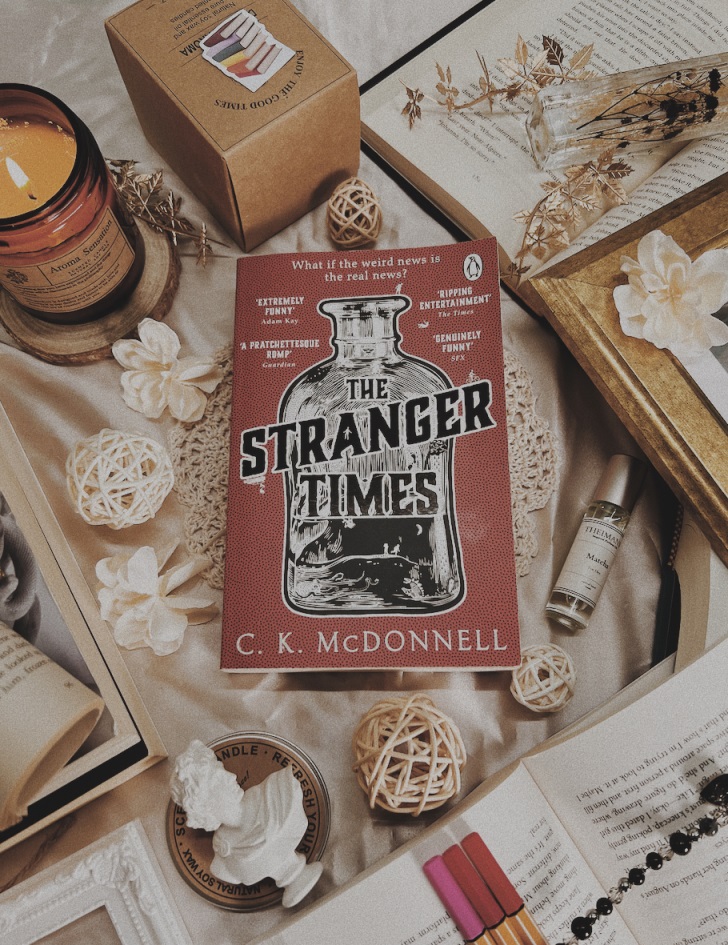 My book-purchasing routine goes as such: I scour Goodreads for an enticing title, I read the synopsis, and I read every *spoiler free* review I can before buying the book. But The Stranger Times was an anomaly. I picked it up at a local bookstore, gave the back of the book a quick read, and immediately decided to purchase this book. Luckily for me, I was able to bypass the purchasing bit as Times Bookstore graciously decided to gift it to me to read and review. Thank you!

This review is very difficult to write, for I have so many things I want to say, but cant as it could get very spoilery. McDonnel writes about a very peculiar newspaper company that doesn't write about stocks or the weather or buy into gossip: instead, it writes about the ghostly supernatural that “plagues” the dark streets of Manchester. But is it true? The public thinks it is. So that must be good enough, right? Suddenly, everything TST has reported on turned out to be actually factually true – bizarre and mysterious things are happening all over the city. Huh, would you imagine that? The TST might be legitimate after all.

With a very *strange* and comedic ensemble on the prowl for anything paranormal, the newspaper’s internals is incredibly chaotic. From the get-go, you are treated with the rambunctious bunch trading quips and banters and even an odd character named Simon who is disinvited from the compound for simply being named Simon. Hilariously written as well, I’ve enjoyed many cackles and giggles through the pages and oddly found a family in the odd cast of characters. Furthermore, the book features examples of news clippings from TST, which makes the book so much more immersive and was frankly one of my favourite parts of the book. However, this book is not perfect, as I did find issues with the pacing and its proclivity to include sometimes irrelevant scenes that I didn't mind skipping.

“The key to life,’ said Banecroft, ‘is looking and acting like you know exactly what you are doing at all times. Margaret Thatcher said that.’ ‘Did she really?’ He turned and raised an eyebrow. ‘No, but thank you for having proved my point.”